“More people will come if they think we have punch and pie!”

Told you guys I’d be back.  Weeeeee.

It looks like the plan (for now) is a new review every two or three weeks!  Hope that’s cool with you guys.  College is a busy but ridiculously fun life, and I’m set on enjoying every last minute of it until May.  After that, I’m hopin’ the reviews will pick up to a faster pace…I always look forward to having some quality time to write.  And to watch cartoons.

Aaaanyway, let’s get to why we’re all here: SOUTH PARK – Matt Stone and Trey Parker’s crude, foul-mouthed, beautiful brainchild.  I’m pretty sure the show was one of the leading reasons why my parents forbid cable in the house, at least while my sister and I were growing up.  I vividly remember my sister coming home from school one day with a letter – a warning to all parents that a TV show known as South Park, though animated, was NOT appropriate for children.  That’s all Mom and Dad needed to hear.

Even after all these years, I don’t blame them for their decision.  During my freshman year at Fordham, curiosity led me to snoop around online and watch a few episodes for myself (it didn’t take much snooping, since Comedy Central provides seasons-worth of South Park online for FREE.  All you other shows oughta take notes).

Anyways, here’s what I learned: sex, foul language, and poop – those are the basics of the series.  But, there’s also the commentary on pop culture, social issues, and current events in general…that last one especially had me hooked.  It still blows me away that an ANIMATED show manages to have the same weekly relevancy as Saturday Night Live.  If you don’t know what I’m taking about, check out the documentary, 6 Days to Air: The Making of South Park.

While other animated favorites of mine, like Family Guy and The Simpsons, also pride themselves in slaying pop culture,  South Park does it with such crude and explicit glee – that’s how the show stands out, and that’s why I love it.  But, as The Simpsons Movie taught us, a great TV show doesn’t always translate into a great film…but Matt and Trey knew what they were doing.

Like I said, these guys knew what they were doing.

Without further ado, grab a snack, relax, and enjoy my review of South Park: Bigger, Longer & Uncut.  Because what else could you possibly be doing on Super Bowl Sunday.

I don’t know what it is about crass comedians/animators/voice actors…but this film proves that Trey Parker and Matt Stone possess a caliber of musical talent that could make Seth MacFarlane turn green.  And I love me some Seth.

But damn, the South Park movie has musical numbers that are easily worthy of Broadway, a venue that Matt and Trey have also conquered.

All I can say is the film makes for a great, adult animated musical – it was nice to see some animated musicality in the ’90s that DIDN’T come from Disney.  South Park nails it: the songs are catchy, hilarious, and contribute to the plot.  I’m particularly partial to this one…especially after I looked up who Brian Boitano is:

You could love South Park or hate it – everyone seems to have a strong opinion on the show’s adult content and crude animation – but I challenge anyone to deny that the music is great.  Plus, theatre geeks will appreciate the blatant references to Les Miserables.

The plot is fantastic too.  Like I mentioned before, underneath all the farting and sexual activity (sometimes happening simultaneously), South Park at its best provides us with clever commentary on social issues and pop culture.  This time around, not so much on current events…since, you know, it’s a movie.  Yet… 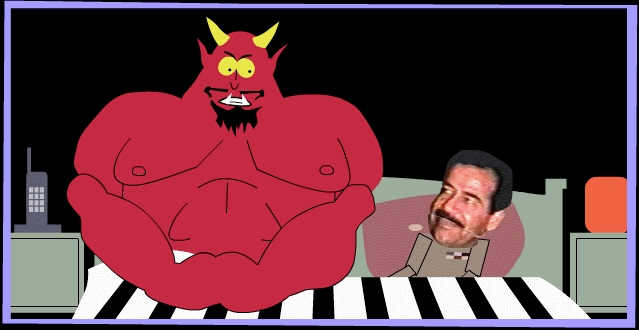 Anyway, the boys are back and stirring up trouble as usual.  It’s revealed that Stan (Trey Parker), Kyle (Matt Stone), Kenny (Matt Stone), and Cartman (Trey Parker) picked up their naughty vocabulary from an R-rated film starring Terrence and Philip, two farting, Canadian comedians.  The adults in town, led by Kyle’s mom (Mary Kay Bergman), begin a fight for censorship to protect their children, starting with a declaration of war on Canada.  The whole situation sounds very reminiscent of…well, the controversy of South Park.  And that’s what makes it so dang wonderful. 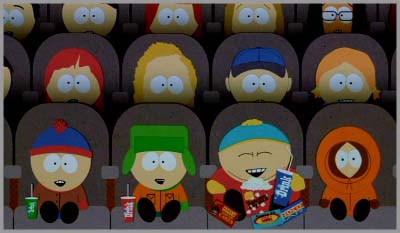 Finally, if you’re a regular reader of mine, you often find the words “crisp,” “detailed,” and “gorgeous” in my blog whenever I’m describing animation.  As for South Park, the animation is what the animation is.  I think it’s pretty appropriate for both the show and the film. 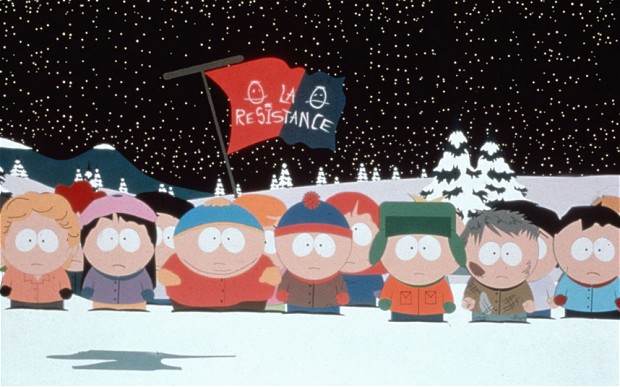 Fun fact: I used to be REALLY creeped out by the animation – that goes for The Simpsons too!  But, as some of you had read before, I used to be scared of literally the stupidest things.

My only legit complaint about the film is that it fails to capitalize on some of South Park‘s most beloved characters.  Maybe back in the late 1990s, Randy Marsh and Butters weren’t as popular as they are today…but man, where were they???

Two of the show’s funniest characters were barely present…for me, that’s a problem.  Again, it’s not a HUGE problem since, as I just said, Randy and Butters probably weren’t as popular or as well-developed back then.  Still, it bugs me.

I loved this movie.  Nothing terrible here, to be honest.  No, I’m not just being lazy.

Part of the joy of animation is that it’s not just for kids – there’s something in this genre for everybody. And South Park was one of the first to give us a fleshed-out animated musical just for adults.  The plot’s hysterical, the music couldn’t be better, and the characters are as memorable and likable (in their own, sick way) as they are on TV. For the most part. I still missed Butters. 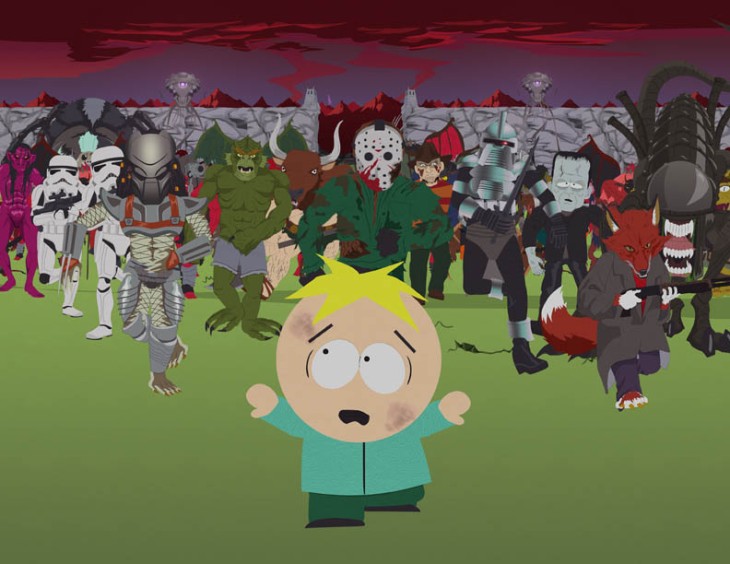 Nevertheless, if crude animation, crass humor, and clever political and societal undertones appeal to you – and you don’t mind some damn good show tunes either – South Park: Bigger, Longer & Uncut is definitely worth a look.  Now, screw you guys…I’m going to watch Downton Abbey.